I originally suffered a severely painful episode with a flare-up in my right knee, which was diagnosed by an orthopaedic surgeon as ‘mild arthritis’. Following a change of physiotherapist, I was fortunate to find in Helen Appanah: someone who immediately recognised that I needed a second opinion about my knee, and she recommended Mr Ian McDermott.

After taking a detailed history and reviewing my MRI scans, Ian confidently diagnosed severe arthritis in all three compartments of my knee, and he confirmed that the only realistic option was a total knee replacement. He discussed the pros and cons, stressing that it was major painful surgery and that it would be a difficult six-month rehab, but at the end of this period, and barring any complications, I should be very happy with my new Conformis custom-made knee and be able to return to the active life I had previously enjoyed.

Ian followed up the consultation with a very detailed letter summarising all that we had discussed, and he sent me several very informative articles to read covering all aspects of the process. He also encouraged me to get in touch if I had any further questions and left the timing of the surgery up to me. Within a couple of months it became clear that I needed the operation sooner rather than later, as my quality of life was diminishing so severely. So, I booked the surgery, and in preparation I followed Ian’s suggestions that I continue with physiotherapy, acquire an exercise bike and arrange to rent a Game Ready ice/compression machine.

My surgery took place in October 2021 at London Bridge Hospital. The whole team there were absolutely brilliant. The surgery went very well, and it was very reassuring to have Ian visiting every day to check on my progress. I was weight-bearing and walking around with the help of crutches within hours. My knee felt stable, my leg was straight and the pain from walking was gone.

At the two-week check-up I had my Stryker Zip dressing removed. It was akin to having a very long plaster taken off, but I am guessing a lot less uncomfortable than removing staples. It was also at this check-up that the ‘McDermott Mantra’ of 10/10/10 made its first appearance: for each of the stretching exercises that I was advised to do, Ian wanted 10 reps for 10 secs 10 times a day, these became the numbers I would learn to live by (even though there were many days when 1/1/1 would have been infinitely preferable!).

It’s now a year since I had my Conformis custom-made knee replacement, and the knee is doing brilliantly. Full extension and 135+ degrees flexion. It’s wonderful to be able to do everything I want again now!

Total knee replacement is not for the faint hearted. It is a physically and psychologically demanding journey, and the choices I made at the start and along the way have been key to a successful outcome. Choosing to commit wholeheartedly to doing the exercises has been so important. Having a skilled physiotherapist like Helen Appanah, who guided and encouraged me through the day-to-day ups and downs of the tough rehab, was priceless. Choosing a Conformis custom-made prosthesis has given me a knee that works seamlessly. Ian is not only technically brilliant surgeon, but he is someone with whom it has been possible to build an accessible, honest and trusting partnership. He has always been a reassuring presence on email, promptly answering any questions I have had.

Thank you, Ian, for your skill, care and kindness, and for saving me from a premature old age! Life is so good and I am extremely grateful! 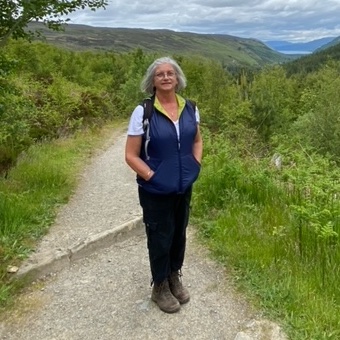